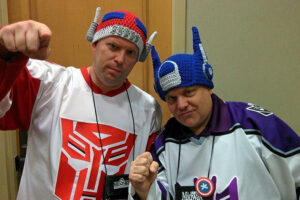 CONVENTION NERDS is an hour-long weekly show on Wasabi Anime’s Twitch hosted by noted convention personalities Tom Croom and Ken “Joey Snackpants” Nabbe. Each week they delve into the culture of anime, comic, gaming and “geek” events by offering a platform for a variety of diverse and informative perspectives. Hear from show runners, fellow fans and others embedded in the trenches of your favorite cons as they share their viewpoints and experiences about this unique facet of fandom. The show is broadcast live on Twitch so that viewers can submit questions and join the conversation in the chat during the stream

Are you interested in being a guest on the show? Click here for more information regarding the episode formats and, if you think you’d fit into one of them, then email us via contact@ConventionNerds.com.

You can find out more about which cookies we are using or switch them off in settings.

This website uses cookies so that we can provide you with the best user experience possible. Cookie information is stored in your browser and performs functions such as recognising you when you return to our website and helping our team to understand which sections of the website you find most interesting and useful.

Strictly Necessary Cookie should be enabled at all times so that we can save your preferences for cookie settings.

If you disable this cookie, we will not be able to save your preferences. This means that every time you visit this website you will need to enable or disable cookies again.